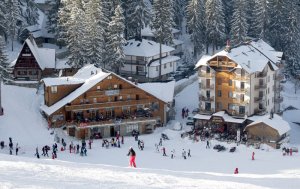 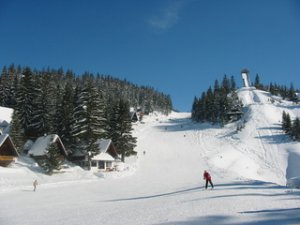 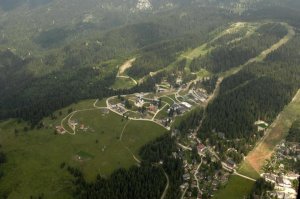 Vlasic (or Vlašic) is a mountain in the very center of Bosnia and Herzegovina. Its peak is called Vlašicka Gromila and has an elevation of 1,969 meters above sea level. The mountain is a major center for winter tourism due to its excellent accommodation for skiing, snowboarding and other winter sports. It is also a popular destination for summer and eco tourism with many hiking trails and undisturbed wilderness areas. The average winter temperature is 1°C (29°F) while the average summer temperature is 14.2°C (60.8°F). In the wintertime snowfall is abundant with an average snow coverage of up to 5 months in accumilation between 1.5-2.1 meters. It is closest to the Bosnian town of Travnik although lodging is available on the mountain itself. The mountain gets its name from the Vlasi (as are called the Vlachs in Bosnia), who lived there attending their sheep since the fall of the Roman Empire. They lived there until the end of the 19th century.