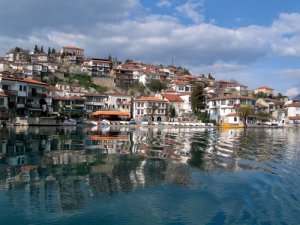 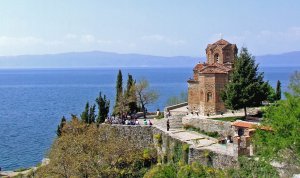 The largest tourist centre in Macedonia, known as Jerusalem of the Balkans, is visited by thousands of tourists every year. In 1979, Ohrid and Lake Ohrid were accepted as Cultural and Natural World Heritage Sites by UNESCO. Ohrid was a centre of Slavic literacy, spirituality and culture. Kliment and Naum, the two best - known disciples of the missionary brothers Cyril and Methodious of Salonica with their arrival, Ohrid developed into a leading centre of Slavic cultural and literary activity. Kliment spent thirty years among the Macedonian Slavs. The first Ohrid literary school was founded at his monastery church of St. Pantalejmon in Ohrid, (built in 893). The 3500 pupils who came out of this school spread the Slavic script, culture, art and church singing across several Slav lands as far as Kiev in mediaeval Russia. By the end of the 9th century and beginning of 10the century the Slavic literacy, spirituality and culture were founded. Ohrid has a deserved place in the spreading of the Slavic spirituality in Europe and across the world, especially in the process of evangelism of the Slavic Christian East. Ohrid is also famous for Ohrid pearl which is his trademark. The production of Ohrid pearl is a family secret tradition passed down one generation to another. During the summer, Ohrid has a very rich nightlife. You can attend on Ohrid festival enjoying the music of the world stars, or go to the night clubs, bars, discotheques and cafe bars.