The Balkans - a fusion of flavors

This tour combines some of the lesser known countries in the Balkans; Albania, Macedonia, Kosovo and Montenegro, by trying to show the best each of these countries offers. Albania offers a mixture of cultural elements with 3 UNESCO World Heritage Sites and a rich archaeological legacy. Macedonia offers some of the most excellent religious relics, with Ohrid having the biggest Icon museum in the region as well as many beautiful churches. This theme is carried over into Kosovo the newest state in Europe, where we combine religious monuments with tasting of wine and local foods. The Tour will end up in Montenegro which has made a name for itself based on its wild natural beauty.;

Meet at airport and transfer to Tirana for a visit at the National Museum of History which is a great introduction to the history of the country and its people. Afterwards take a driven tour of the major sites of Tirana, including the colourful buildings for which the Albanian capital is now known. The dull grey communist architecture buildings have been transformed into modern art canvases through splashes of bright colours and abstract shapes. An ingenious way of uplifting the facades and the moods of the inhabitants. Overnight in Tirana. 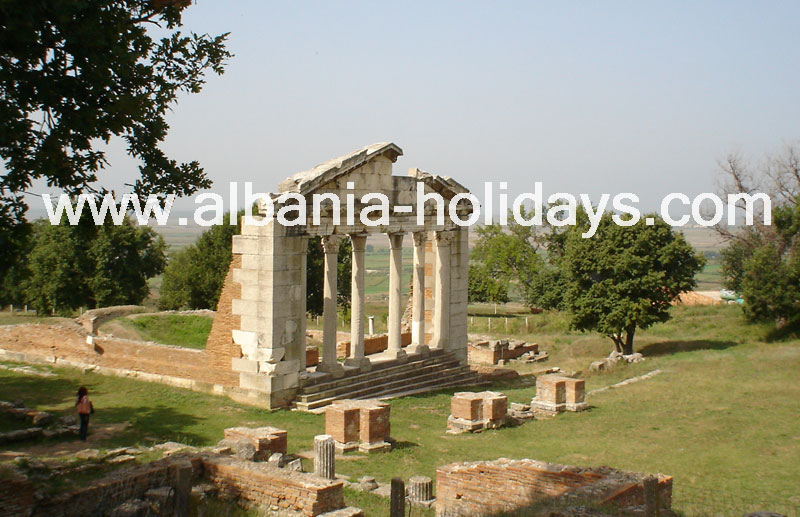 After breakfast we depart for the archaeological site of Apollonia one of the most important ancient centres in Roman times on the famous Via Egnatia. Due to its fame and importance it was known as Apollonia Prima built to honour Apollo. Caesar chose to send his nephew Augustus Octavian to study oratory in Apollonia which is testimony to the importance of this ancient city. Visit the city and an Orthodox monastery turned into an archaeological museum. After the visits continue on to Vlora where we overnight.

After breakfast we depart to Saranda through the spectacular Albanian Riviera with its traditional villages. At the Llogara National Park we stop at around 1100 metres where spectacular views of the Ionian Sea can be admired. Afterwards continue along the wonderful coast to the ancient city of Butrint another UNESCO World Heritage considered the best archaeological site in Albania and probably one of the most important in the Balkans. The city was first settled by Greek colonists and was continuously inhabited for centuries forming archaeological layers of passing civilizations, giving archaeologists the possibility to study continuity through time. It is situated on a beautiful peninsula among dense vegetation. The site has been occupied since at least the 8th century BC, although myths associated with its origins speak of the city’s foundation by Trojan exiles. After a thorough visit of the site return to Saranda for overnight.

In the morning we depart for Gjirokastra a museum town under the protection of UNESCO as a World Heritage Site with beautiful and very distinct architecture. On the way we stop at the Mesopotam Church where carvings of mythological beasts can be admired on the outer walls making this a distinct church where mythology and religion combine in a place of worship. Afterwards in Gjirokastra we visit the fortress part of which was turned into a political prison for dissidents of the communist regime and an Arms Museum. Visit to the Ethnographic Museum, which is also the house the Albanian dictator was born in, as well as a 300 year old house next to it, where the grandeur of Gjirokastra’s master builders can be observed. Overnight in a Gjirokastra House turned hotel, an interesting and unique experience.

After breakfast depart for Berat, one of the most visited and characteristic towns in Albania under the protection of UNESCO as a patronage of humanity for its architectural uniqueness. We visit the Castle and the Onufri Museum. Berat castle is of particular interest as people still live within its walls in their traditional houses, as have their ancestors for centuries. The castle used to have over 40 churches of which 7 still remain including St.Mary’s church turned into Onufri Museum. Onufri was a famous Albanian Icon master painter of the 16th century who painted many orthodox churches in Albania and Greece, using a special red colour. Berat is also known for its close ties with religious practice as two of the oldest bibles in the world have been found here. One dates back from the 6th century AD and the other from the 9th century AD and are internationally renowned for their theological importance. We have a homemade lunch in one of the houses in the castle. Just below the castle we visit the Leaden Mosque, the King's Mosque, the Bachelor's Mosque and the Alveti Tekke completing a tour of this town’s religious tolerance. Overnight in Berat in the old district of Mangalem in beautiful old houses turned hotels.

After breakfast depart for to the city of Ohrid. On the way we drive through rural villages with wonderful countryside landscapes. We stop at Elbasan for a visit at the castle. Afterwards proceed to Struga famous for its wall of water where the Black Drin River flows out of Lake Ohrid on its way to the Adriatic. In August, the famous international poetry festival is staged on the bridge over the Black Drin. After a short visit continue on to Ohrid where we take a familiarization tour of the town, proclaimed UNESCO World Heritage region for its cultural and natural legacy. Overnight in Ohrid.

After breakfast visit: Church “St. Sofia”, built between the 11th and 14th century, was the seat of the Archbishop. “St. Clement”, a classic Orthodox Byzantine church, dominating the Old Town, demonstrates the link between Byzantine and Italian Renaissance art. At “Plaoshnik”, in the 9 the century, St. Clement of Ohrid founded the first University of Europe and educated 3.500 students, St. John at Kaneo, stands alone on a small promontory which juts out into the Lake at the western end of the Old Town, and provides spectacular panoramic views of the Lake and surrounding mountains, Samuil fortress, etc. Other visits include: Saint Painteleimon Church, The Holy Virgin of Peribleptos Church, Icon Gallery, and old Bazaar. Overnight in Ohrid.

After the breakfast drive to Stobi one of the most important archaeological sites in Macedonia. Lying in a fertile valley just a few minutes off the central north-south highway that connects Macedonia with Greece, the ancient city of Stobi was a vital trade route in its days. Visit the excavation sites with beautiful remains such as a 2nd century amphitheatre, the Theodosia palace and early Christian ruins with extensive and ornate mosaic floors. Afterwards depart for Skopje where we take a guided tour of the main sites. Visit the old Turkish bazaar, Mahmut Pasha Hammam, the memorial house of Mother Teresa, stone bridge and the Macedonia Plaza. Overnight in Skopje.

After breakfast we drive to visit Prizren, a true open air museum, one of the most beautiful towns of Kosovo. It is situated on the slopes of the Sharr Mountains and on the banks of the river Bistrica. The craftsmen of Prizren are well known for their beautiful gold and silver articles and other folk handcrafts. From all the cities of Kosovo, Prizren has best preserved the architectural style of the past. Take a short tour of the Rahoveci renowned wines; Stone Castle and Podrumi i Vjeter, where a traditional lunch with the nice local wines concludes the first half of the day. Afterwards head towards Peja through the magnificent the Rugova Gorge to the Decani Monastery near it. This monastery complex is a wonderful example of the Orthodox religious architecture and art part of UNESCO World Heritage Site and a must for anyone visiting Kosovo. Overnight in Peja.

After breakfast a long drive through magnificent natural beauty of the North West Kosovo and Montenegro takes us to Kolašin which is Montenegro's most famous ski resort, and its capital Podgorica. We will take a driven tour of the capital, Podgorica, and continue on another panoramic drive Cetinje a town of immense historical heritage, founded in the 15th century. It became the centre of Montenegrin life and both a cradle of Montenegrin and an Eastern Orthodox religious centre. Budva overnight.

After breakfast drive to visit The Old City of Kotor a well preserved urbanization typical of the Middle Ages, built between the 12th and 14th century. Medieval architecture and numerous monuments of cultural heritage have made Kotor an UNESCO listed “World Natural and Historical Heritage Site”. Cetinje is a town of immense historical heritage, founded in the 15th century. It became the centre of Montenegrin life and both a cradle of Montenegrin and an Eastern Orthodox religious center. It is because of its heritage as a long term Montenegrin capital that it is today the honorary capital of Montenegro.

After breakfast drive to Shkodra. On the way stop for a photo at Sveti Stefan renowned for its celebrity residents from the music and movie industry. Afterwards proceed to Shkodra centre of Roman Catholicism in Albania and a town with long historic roots, and the only mentioned capital of the Illyrian Kingdom. Visit the pedestrian area with Italian influences and the Castle thought to exist from Illyrian times. Lunch is recommended to be had in a village where organic tourism is promoted. After lunch return to Tirana to rest. Overnight in Tirana.

After breakfast transfer to Airport.

Supplement for single occupancy of a double room will be 300 Euro.

Supplement for single occupancy of a double room will be 290 Euro.

Note: The above months are for orientation purposes, to help people book on the same months, and pay the cheaper price. However we will run this tour on other months as per clients’ requests.

Read reviews for this tour or write your own tour Review


View The Balkans - a fusion of flavors in a larger map